Vaccinations and the Insurance Industry: Trends and Considerations

Numerous health professionals have called vaccinations one of the greatest advances in medicine in the last two centuries. Bits of inactivated virus or synthesized viral DNA are put into the bloodstream, and the body’s immune system gets in some target practice. Indeed, it is something of a scientific and immunologic marvel. Given this achievement in science, why is a growing subset of the population turning their backs on vaccines, and how will that impact the life underwriting industry?

Is this a new problem?

The World Health Organization characterizes the fear or refusal of vaccinations as “vaccine hesitancy” and has listed it as one of the ten threats to global health in 2019. Still, vaccine hesitancy is not a new phenomenon. Documented as far back as when vaccination was established as a prevention for smallpox in 1797, significant distrust of the practice spurred court cases and outrage. And this reluctance has never completely disappeared. Since then, we’ve observed several notable cycles of increased vaccine reluctance, disease outbreak, and a return to vaccine adoption (Williamson et al.).

What makes our current climate any different than the past, then? While there isn’t a definite answer, we can speculate that at least one major difference is the big leaps in information technology in our day-to-day lives. Never before in history have we had information so easily accessible at our fingertips, and increasing globalization means word of mouth from one end of the globe can be heard on the other within milliseconds.

Never before has the average person been so informed of both fact and fiction, and that has likely led to many more individuals questioning the necessity of vaccinations.  The World Health Organization notes that safety concerns, misinformation, and mistrust are all factors in vaccine hesitancy and, in fact, a higher education does not necessarily translate into a wider acceptance of vaccinations. Regardless, it’s believed that effective communication is vital in combating these factors.

What can be done?

In a 2017 study by Ames et al. published in the Cochrane Database of Systematic Reviews, the authors examined 38 studies qualitatively with data representative of multiple countries and multiple vaccines. They found that across the board, mothers, regardless of their views on vaccinations, felt that they weren’t informed well about vaccinations, wanted more unbiased information, and generally trusted healthcare workers as sources of information. These results may be indicative of a lack of communication with patients, a need for more education in a less judgmental manner, and a signal for healthcare workers to redouble their efforts. 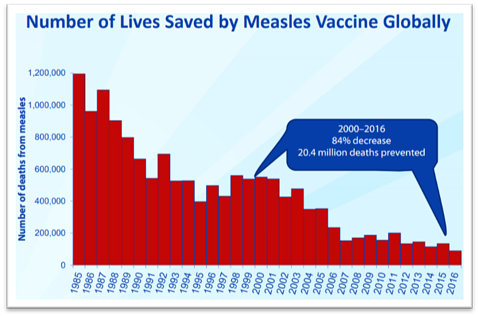 Centers for Disease and Control. Measles data and statistics.

What is the risk?

For simplicity we will address measles, one of the deadlier pathogens the MMR vaccine intends to prevent. The CDC estimates that worldwide cases of measles have decreased 87% globally from 2000 to 2016, and the number of deaths has decreased by 84%. These statistics roughly equate to 20.4 million deaths prevented during this 16-year period.

Comparatively, the number of measles cases in the US and Canada is low compared to the number of global cases, but it’s increasing rapidly. 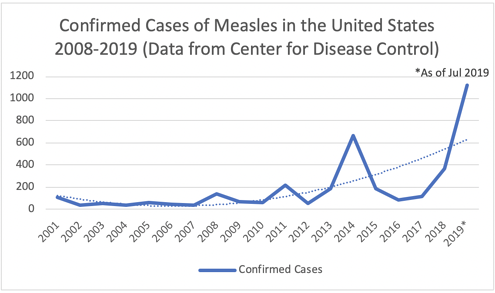 Centers for Disease Control and Prevention.
Measles cases and outbreaks: Data from January 1 to April 19, 2019.

The CDC estimates one in four cases of measles will require hospitalization, one in 1,000 cases will progress to encephalitis, and roughly one to two cases in 1,000 will result in a death. The most recent death in the U.S. was documented July 2, 2015, and with the number of cases expected to exceed 1,000 by the end of 2019, complications arising from measles are expected to reach highs that we haven’t seen in over a decade.

What is the cost?

Actual costs of diseases can vary depending on the specific disease, where it is treated, and the healthcare system in which it is treated. Some cost estimates of a single measles case have ranged from $80K USD to $140K USD (Dayan et al.). It has also been estimated that the cost savings with immunization range from 12 to 46 billion per year for the United States, with an overall benefit-cost ratio of between 5.3:1 and 16.5:1(Zhou et al.). Despite these mortality and monetary costs, many individuals still choose an alternate route.

As a result of the many challenges in identifying and evaluating individuals at risk, few, if any life and health insurers in North America have established guidelines on underwriting unvaccinated individuals. While few–to–no insurers have publicly acknowledged the underlying reason, it is likely the following are factors making establishing guidelines a challenging endeavour:

The data on vaccine hesitancy and associated mortality and morbidity rates in these populations are not currently reliable. While vaccine hesitancy is not a new phenomenon, it is new to modern science and epidemiological records. Additionally, as with any epidemiological study, social factors play a significant role in how often incidents of disease are reported and whether individuals are willing to report their views and actions. These factors are more difficult to assess and likely more difficult to assess fairly.

As different diseases affect mortality and morbidity differently, evaluating the impact of all vaccines is a formidable task. The body of evidence is not equal across all vaccines, and vaccine schedules are not the same across all countries.

With vaccine hesitancy on the rise, many of the outbreaks in North America have arisen in small communities, for instance, Orthodox Jewish ones in New York and Amish ones in Ohio. While outbreaks in specific communities make identifying populations at risk easier for public health officials, this type of data typically cannot be used by insurance companies and can be considered discriminatory depending on state and federal regulations.

Herd immunity is a concept in immunology in which a population can essentially prevent the spread of a disease by having a large majority immune to it. Individuals immune to the disease serve as biological barriers between the disease and susceptible individuals. In most cases the acceptable coverage is approximately 80% to attain herd immunity (Plans-Rubio).

Some vaccine hesitant individuals cite herd immunity as the reason why they don’t need to vaccinate. However, this view can be considered short-sighted as immune deficient individuals and vaccine failures are often not taken into account. First, vaccines do not grant immunity to all individuals. In fact, approximately 18% of individuals will not attain immunity after two doses of the measles vaccine (Isik et al.). Second, vaccine immunity falls off over time. For these reasons, the WHO estimates approximately half of all cases of measles occur in children who have been fully vaccinated (WHO).

Undoubtedly, the phenomenon of vaccine hesitancy is a contemporary public health concern. With the risk of contracting vaccine-preventable diseases increasing, and their associated costs rising as well, they’re becoming a mortality risk that can no longer be ignored. Accordingly, we’ve reviewed some of the major hurdles in underwriting unvaccinated populations and the significant challenges posed to underwriters and medical officers in determining ratings. A solution may be possible given enough time, evidence, and a heavy focus on geographic location, but the resources required to establish and maintain underwriting guidelines may not be feasible from an efficiency standpoint.  Vaccine hesitancy is an emerging trend in global health that medical professionals and insurance companies should keep a watchful eye on now and in the future.

Al is an Underwriter at RGAX. He supports the RGAX Underwriting Solution Services team in providing comprehensive life insurance underwriting solutions to help carriers optimize risk management outcomes and better compete now and into the future. A subject matter expert, Al holds a medical doctorate and Master of Science degree, and has extensive experience in medicine, teaching, and risk management, bringing a new perspective to a rapidly changing and growing industry.