ECG Interpretations and Common Benign Rhythms: Straight from the Heart

This article was originally featured in the September 2019 Issue of OTR and is reprinted with permission of ON THE RISK, Journal of the Academy of Life Underwriting.

Despite the advent of automatic ECG analysis, there is still a place for ECG interpretation in underwriting. Additionally, not all arrhythmias are equal, with some more benign than others in certain scenarios. Sinus arrhythmia is one of the only rhythms that is truly benign. Sinus bradycardia, premature atrial contractions, axial deviations, T-wave inversions and benign early repolarization can be recognized as benign in some situations, but ultimately, the overall picture and critical interpretation are most important. Recognizing benign rhythms can improve the overall underwriting process, but recognizing when a benign rhythm is not so benign is just as important. Always follow your company guidelines and, when in doubt, refer to your medical director.

Electrocardiograms (ECGs) have long been a challenge for physicians and underwriters alike, with many medical graduates and graduating residents being unable to grasp some of the fundamental rhythms by the end of their education.[1] With the advent of automatic ECG interpretation, life has become easier and more ECGs can be done in a shorter amount of time. More clinicians are relying on these computer-generated analyses; however, the discrepancy rate between human and machine interpretation can be high and has been shown to be approximately 6% with specific rhythms reaching up to 42%.[2,3]

Considering the gap in reliability between man and machine, an additional look at ECGs by an under-writer can prove to be valuable. Additionally, a solid foundation of terms and an understanding of benign rhythms can save time in the underwriting process. It is with this in mind that we review some benign and not-so-benign cardiac rhythms underwriters should be looking out for in their ECG tracings and reports.

This review and discussion assumes a moderate understanding of cardiac anatomy, physiology and basic electrocardiogram knowledge, serving more as a refresher than a tutorial.

Reviewing the Anatomy of PQRST

A straightforward method of understanding the typical electrophysiologic pattern is to consider the conduction of measured electrical impulses as moving toward or away from the specific lead. The deflections above the resting voltage are moving toward the lead in question, and the deflections below are moving away. In the classic pattern shown here, the lead placement is positioned inferior to the heart (Fig. 1). 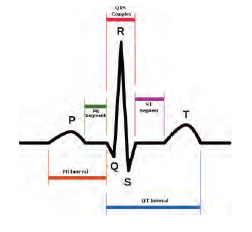 Figure 1. The QRS complex.
A review of the typical appearance of PQRST waves of an electrocardiogram.

The P-wave represents atrial depolarization and contraction. The electrical impulse generated at the sinoatrial (SA) node travels inferiorly toward the atrioventricular (AV) node in the interatrial septum and down the bundles of His.

The Q-wave represents depolarization of the inter¬ventricular septum as the electrical impulse conducts through the bundles of His at very high speed. Be¬cause the electrical impulse travels quickly through this structure, the Q-wave is typically very short and/ or hidden by the much larger R deflection. It also depolarizes from the apex of the heart back toward the AV node, hence the negative deflection. In heart disease with damage to the interventricular septum, conduction can be slow due to scar tissue formation and Q-waves may become more prominent. A Q-wave deflection of more than 1 mm is suggestive of pathology.

The R-wave is representative of the depolarization of the ventricles at the apex. Once the electrical impulse travels through the bundles of His, it reaches initial Purkinje fibers at the apex and contracts the ventricles. Specifically, the right ventricle and the apex of the heart are contracted first, creating the large positive deflection of the R-wave.

The S-wave is believed to represent the depolarization of the ventricles away from the apex, through the remaining Purkinje fibers.

In the standard 12-lead ECG, the leads represent different views of the heart and specifically the direction voltage is flowing toward or away from the specified lead (Fig. 2). 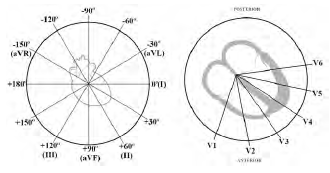 In the frontal/coronal plane, leads II, III and aVF represent the inferior aspect of the heart (Fig. 1) while leads aVR and aVL represent the right and left of the heart, respectively. Note the axis of the QRS complex is between aVL and aVF, thus -30 and +90 degrees.

While the majority of the rhythms we will be discussing are benign, there is always risk associated with them. In some cases, there is a risk of converting to a pathological rhythm, and a small increase in mortality that may or may not be significant depending on the specific company. In each case, consult your manual or medical director when in doubt and follow your company procedures.

When symptomatic, bradycardia can be associated with heart failure, ischemia, cardiomyopathy, certain medications and hypothyroidism, to name a few. Thus, the key factor in determining if bradycardia is benign is determining if there are any associated symptoms or comorbidities. When isolated and asymptomatic, consider reviewing the applicant’s build and cardiac history. In an asymptomatic individual with normal build and no cardiac history, a rate of <40 can be considered normal.

Sinus Arrhythmia
Sinus arrhythmia, also known as respiratory sinus arrhythmia, is a fluctuation of heart rate between individual beats with a consistent PR interval and normal P-waves (Fig. 3). The variation in rhythm is due to respiration and is typically more prominent in younger individuals.

Few studies examine sinus arrhythmia. It is believed to be one of the only rhythms that is completely benign on its own with no increase in mortality. It is common in young, healthy individuals, tends to disappear with age, and can potentially be confused with second degree AV block and premature atrial contractions.

Figure 3. Sinus Arrhythmia and Premature Atrial Complexes.
Sometimes confused with one another, premature atrial complexes (PACs) <arrows> usually do not disturb the normal R-R intervals, although possible, and do not typically have a normal P-wave morphology. Seen here is a run of atrial bigeminy, several regular QRS complexes followed by PACs in a 1:1 ratio.

Modified from source: Life in the Fastlane (www.lifeinthefastlane.com)

These are characterized by abnormally shaped P-waves that often precede narrow QRS complexes (Fig. 3). In some cases where the P-wave is so premature it overlaps with the preceding T-wave, a QRS complex may not follow due to the refractory period following the last QRS complex. It’s understood that the abnormal morphology of the P-wave in PACs is due to the impulse arising not from the SA node, but rather an aberrant source elsewhere, such as in the atrium or the AV node.

The prevalence of PACs is fairly high among the general population, with approximately 99% of adults >50 years of age and 73% of young, healthy individuals experiencing at least one PAC in a given 24-hour period.[7,8] Because of the high prevalence of PACs in the general population, studies have tried to determine the frequency of PACs at which an increase in mortality can be predicted.

One study by Lin et al. found a PAC burden of >76 beats per day resulted in a 38% increase in all-cause mortality over 10 years, compared to a PAC burden ≤76 beats per day.[9] The main causes of mortality were attributed to infection and cardiovascular events. Other studies have shown PACs to be a significant predictor of atrial fibrillation, with an increased likelihood of between two and four times that of the general population.[10,11]

Generally, ECG technicians will not include PACs on their final report unless they are very frequent. Understanding that PACs are a normal occurrence at lower frequencies can be helpful in interpreting Holter monitor reports, sleep studies, and any studies which take into account a long-term ECG or rhythm strip.

The normal QRS axis is typically between -30 and +90 degrees, or between aVF and aVL. Axes beyond -90 and +180 degrees represent extreme axis deviation, essentially conducting in the reverse direction of the normal axis range. Extreme axis deviation is never a benign finding.

One method – a personally preferred method – of determining axes on an ECG is using the equiphasic or “isoelectric lead” (Fig. 4). An isoelectric or near isoelectric lead indicates an axis perpendicular to that lead, after which an examination of a lead to the left or right on the frontal plane can deter¬mine the direction of the deviation. The lead with the largest positive deflection in the frontal plane will be closest to the true axis. Knowing how to determine the axis can be helpful when a misplaced lead on an ECG results in an axis deviation on the automatic interpretation.

Figure 4. Using QRS morphology to determine axis deviation.
A positive ratio of R- and S-waves denotes the electrical impulse moving in a general direction toward the lead examined; a negative ratio, away from the lead. An equiphasic ratio, also known as the isoelectric lead, indicates the axis is perpendicular to that lead.

Source: Life in the Fastlane (lifeinthefastlane.com)

When faced with an ECG reading of left axis deviation, a critical analysis of other cardiac diseases should be done. A combination of blood pressure readings and an echocardiogram would be ideal in ruling out most associated pathologies.

Defined as a negative deflection of the T-wave, a T-wave inversion alone should raise suspicion for cardiomyopathy but in some cases can be benign.

T-wave inversions outside of the aforementioned populations are typically associated with hypertrophy and cardiomyopathy and could warrant additional investigations.[16] 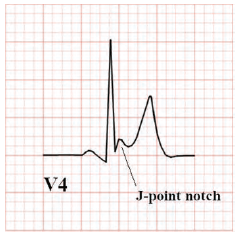 The prevalence of benign early repolarization can be as high as 24%, depending on age and sex, and is typically more common in younger individuals. Previously thought to be completely benign, research in the last 2 decades has shown some cases are associated with more insidious outcomes.[18]

Often automatic ECG readings will describe this morphology as a “possible ST elevation” or “possible infarction.” The distinguishing factors are the lack of reciprocal lead changes (typically in leads II, III and aVF in a true infarct) and the lack of evolution over time. If an individual has multiple ECGs that consistently show the same infarct, a high suspicion for benign early repolarization is warranted.[18]

In terms of mortality, one study showed a 1.87-fold increase in mortality with a pattern of benign early repolarization, a higher rate of idiopathic ventricular fibrillation and sudden cardiac death.[19] The exact cause of the increase in mortality is not entirely clear, but some have hypothesized a relationship with Brugada syndrome, another syndrome associated with a similar ECG pattern and sudden cardiac death.[20]

As we have discussed, not all rhythms beyond “normal sinus rhythm” are abnormal, but not all “benign rhythms” are benign either. In all cases, underwriters should take in a holistic view of the applicant and decide for themselves what is and isn’t worth investigating further, keeping in mind their company’s philosophies, cardiac guidelines and underwriting manual.

While automatic ECG readings have proven fairly effective in most cases, there is still room for error and improvement. An adept and critical underwriter can increase time and cost efficiency with the appropriate knowledge of recognizing rhythms and incorporating that knowledge into the case documentation with all risk factors and merits of the case. A well-informed and well-thought-out tentative decision referred to the medical department will warm the heart of any medical director.

Al is an Underwriter at RGAX. He supports the RGAX Underwriting Solution Services team in providing comprehensive life insurance underwriting solutions to help carriers optimize risk management outcomes and better compete now and into the future. A subject matter expert, Al holds a medical doctorate and Master of Science degree, and has extensive experience in medicine, teaching, and risk management, bringing a new perspective to a rapidly changing and growing industry.