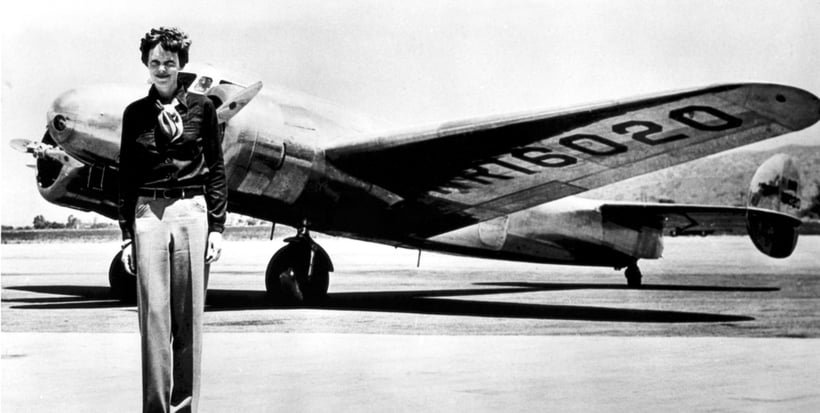 What Key Learnings Can the Insurance Industry Draw from History?

The “Roaring 1920s” was a remarkable decade in world history and an especially flourishing time for the US — at least until the stock market crash of 1929. This article sums it up nicely.

As we enter into a new decade, and as I was preparing to write my annual “predictions,” I began thinking, “I wonder what lessons from the 1920s could still be applicable or relatable today?”

And to my surprise —there are MANY.

I took a look at some significant trends and events from the 1920s to see how they might relate to those we may see in the 2020s (please note though that much of the 1920s research I’m sharing is US-based, but I think the trends are applicable globally in the 2020s).

Interestingly, of all the trends in this article, this was the hardest to research. Here is what I found:

Bottom line: Agents and direct-to-consumer were two of the major channels for selling insurance.

Unsurprisingly, these are still the predominant channels today.

Anyone who has read my articles over the past two years knows I am bullish on the future of the agent channel. Further, of the 45 carriers I met with last year, almost half (20 or 44%) mentioned they have specific innovation strategies for their captive and independent agent networks.

I believe the 2020s will see a resurgence in the agency channel. However, I also feel agents will be consulted for more specialized products and for deeper planning with families, businesses, and corporations. More straightforward products such as renters and term life can and will be sold direct to consumer. Some insurance products will be embedded into offerings, making it seamless to get protection by eliminating the need for an intermediary.

The agents who will thrive throughout the 2020s will bring added value to their customers, earning trusted advisor status, providing support beyond building insurance plans, collecting premiums, and being there to help with the claims process. Insurance in the 2010s started a trend towards more preventive features - think telematics for auto insurance, sensors for home/commercial workers, and wearables for life. Agents embracing these new technologies and learning how to incorporate them into their clients’ journeys will be best positioned for success.

The 1920s were a great time for women’s rights and inclusion in the US:

The importance of women in our global economy becomes more amplified on a daily basis. While pay equality and gender diversity in the workplace (especially senior management positions) is not where it should be, tremendous strides have been made over the past decades. According to McKinsey’s Women in the Workplace 2019 study,

“Despite progress at senior levels, gender parity remains out of reach. Over the past five years, we have seen signs of progress in the representation of women in corporate America. Since 2015, the number of women in senior leadership has grown. This is particularly true in the C-suite, where the representation of women has increased from 17 percent to 21 percent. Although this is a step in the right direction, parity remains out of reach. Women—and particularly women of color—are underrepresented at every level. And without fundamental changes early in the pipeline, gains in women’s representation will ultimately stall.” 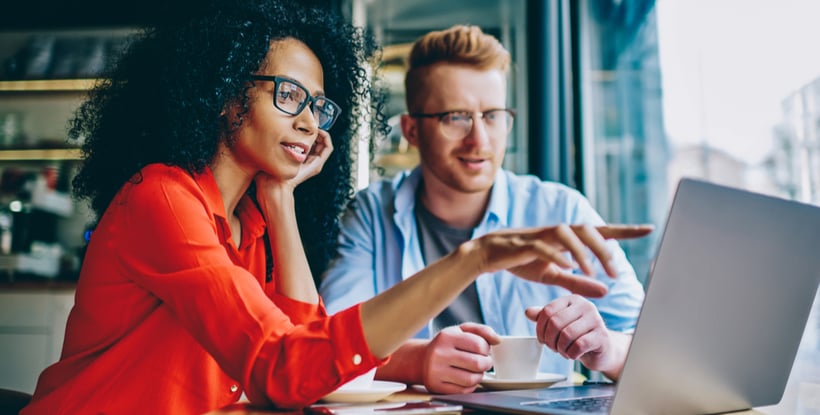 We seem to have a long way to go notwithstanding some of the strides mentioned above. Still, I found a couple of strong articles spotlighting women in tech and women in leadership.

And as I’ve made my rounds through the insurtech circuit this year, I’ve seen more women founders, more women panelists and more women influencers than ever before. During my days managing agents in Asia, women were always at the top of our leaderboard in terms of sales.

Quesnay’s Female Founders in Tech program and Dig-in’s Women in Insurance Leadership are two examples of how leading industry and media organizations are driving more visibility, opportunity and awareness for female talent in insurtech.  In addition, Quesnay’s program also provides many startups access to capital, mentorship, and partnership opportunities.

I love seeing the representation of women trending upward and look forward to it continuing in the 2020s.

In January 1919, the 18th amendment was ratified. This prohibited the “manufacture, sale or transportation of intoxicating liquors within, the importation thereof into, or the exportation thereof from the United States and all territory subject to the jurisdiction thereof for beverage purposes.”

In layman’s terms the 1920s became the era of prohibition: alcohol was illegal until prohibition was repealed in 1933 by the 21st amendment.

This article ”Alcohol Prohibition Was a Failure,” states that prohibition “led many drinkers to switch to opium, marijuana, patent medicines, cocaine, and other dangerous substances that they would have been unlikely to encounter in the absence of Prohibition.”

Interestingly, we’re seeing a trend with another substance that was historically prohibited: cannabis. Individuals are switching from alcohol to marijuana, and finding “zero enjoyment out of drinking.” Further, it seems as if marijuana as a substance (if one is to use a substance) is somewhat better for them.

The growing prominence of cannabis has significant impacts on the insurance industry:

While cannabis is currently only legal for recreational purposes in Canada, Georgia, South Africa, and 11 American states, I expect the trend of legalization to increase. And that means massive opportunities for insurance.

The automobile industry in the 1920s became more mainstream because cars became more affordable for the general public. If you’re into the history of automobiles, check out how this article discusses the industry’s importance: ”The automobile has been a key force for change in twentieth-century America. During the 1920s the industry became the backbone of a new consumer goods-oriented society. By the mid-1920s it ranked first in value of product.”

Moreover, automobile insurance began becoming mandatory in the 1920s. “In 1925, Massachusetts made it compulsory for drivers to purchase liability insurance as a prerequisite for vehicle registration. In the same year, Connecticut also passed the first financial responsibility law for motorists.”

Our reliance on automobiles as a means of transportation has grown exponentially. Accordingly, the way we use and insure automobiles is changing and will continue to do so:

The 1920s saw the increased adoption of both driving and insuring automobiles.  I believe the innovations we’ll see in the 2020s will continue to reinforce the importance of automobiles and the corresponding insurance required.

The stock market crash of October 1929 began the period known as the Great Depression.

The Dow Jones Industrial Average (DJIA) “is one of the oldest and best known indexes in the financial industry. It has, by its nature as a benchmark for the largest stock market in the world, become an important barometer of global confidence over the years.” It has been performing quite well over the past decade. As this chart shows, while the index is overall up since inception, a number of corrections have occurred along the way. 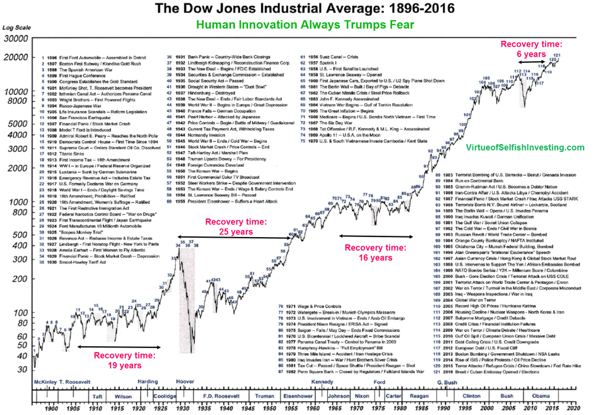 Many (including me) think a correction is on the way. As I’ve mentioned in my predictions in years’ past, a correction may stymie some of the investments in innovation we’ve seen over the past several years.

#6 The Nature of Work

In May 1926, ”Ford Motor Company becomes one of the first companies in America to adopt a five-day, 40-hour week for workers in its automotive factories.”

I was surprised to find this fact during my research for this article. I had no idea that the five-day, 40-hour work week was invented 100 years ago.

A big driver of change that started over the past decade and will continue into the 2020s (and beyond) is the way people work.

One of the biggest changes is the “gig” economy. From the rideshare example I mention above to providing “fully employed” benefits to freelance workers (a massive gap between full time and freelance exists today), many opportunities for insurance can be found in this sector.

Besides, let’s not underestimate the impact that automation may have on the workplace.

As an increasing number of individuals seek more flexibility in the way they work, as technology continues to evolve, and as the working community continues to challenge the mold of the five-day, forty-hour work week, we’ll see similar advances and shifts in insurance.

According to this article, “Mass media was born in the 1920s…In November 1920, the first commercially-licensed radio station began broadcasting live results of the presidential election. The transmission of breaking news was new and unprecedented, and as word spread of this new medium, the ‘talking box’ exploded in popularity. Two years later, Americans bought 100,000 radios. In 1923, they bought 500,000. By 1926, there were over 700 commercial radio stations, and virtually the entire country was covered by radio signals. As Burns writes, ‘No other event of 1920 would have more of an effect on the future than the birth of radio, with was in turn the birth of American mass media.’”

In addition to the introduction of radio in the 1920s, television was invented towards the mid-1920s, providing another means of communication for the masses.

Just for fun, two other inventions I found interesting in the 1920s that we may draw some parallels to in the 2020s (non-tech related):

I had tremendous fun researching this article and hope you had fun reading it, too. What do you think we’ll see in the 2020s that will impact our everyday lives and the insurance industry? I’d love to hear your thoughts.

Stephen Goldstein leads the Client Experience team for RGAX Americas, where he’s working directly with insurance carriers, reinsurers, MGAs and agencies in the US, Canada and Latin America to identify pain points across the insurance value chain. His team is responsible for providing insight, recommendations and solutions within RGAX’s suite of products & services to help solve for many of these challenges. Prior to joining RGAX, Stephen spent over 10 years in insurance and financial services across the U.S., European, and Asian markets in various roles including distribution, operations, audit, market entry, and corporate strategy.